Mangaluru: Baden Powell has rightly said “The secret of sound education is to get each pupil to learn himself, instead of instructing him by driving knowledge into him on a stereotyped system”. The purpose of the Scouts and Guides Camp is all about building confidence, self–esteem, learning important life skills and leadership skills, team building, education and fun!

Mount Carmel Central School, Maryhill, Mangaluru organized a 2 day Scouts and Guides camp on 28th and 29th of March 2022 to get into the spirit of the Scouts and Guide movement. The camp was inaugurated by hoisting the Scouts and Guides flag by the Colour Party Guide Ann Marissa Valdar, Scout Johan Gladson and Kevin Kushalappa.  The Principal Sr Melissa and the Administrator Sr Carissima were present for the Inauguration.

“The body achieves what the mind believes.” The first session of the Camp began with the BP6 exercise by the Scout Masters Mr Praveen and Mr Melwyn.

‘Cooking without fire’, a group competition was organised to make the children aware of nutritious food and the importance of nutrients in the diet. Students participated with enthusiasm by preparing appetising dishes like Vegetable Salad, Fruit Salad, Chats and Sandwiches etc.

Treasure Hunt,an excellent game for training the path-finding and deductive powers of the young students was conducted. Each Patrol was given a clue in different colours.  One clue gave the lead to another clue and in the end they discovered the treasure in one of the classrooms.

Day 1 at the camp ended with discussion of the Scouts and Guides in their respective patrol groups to discuss and to prepare for tent making and gadget making, using the knots they had learnt in the morning.  The students were also asked to prepare for the camp fire programme to be held the next day.

Day 2: All the stress that builds up needs an outlet. With this note, the Day 2 of the camp began with jogging, covering a distance of 1.8 km around the vicinity of Maryhill where the school is located. This was followed by the hoisting the flag by the colour party.

Parents often tell children about ways to keep themselves safe. But some messages are hard to convey. Therefore Day 2 of the Camp began with a session about ‘Good Touch and Bad Touch’ by teacher Philomene, the school counselor.

The Scouts/Guides need to be helpful under any difficult situations. So, the next session was a ‘First Aid Session by Ms Shubha Vishwanath, District Commissioner, Scouts and Guides, Dakshina Kannada. Students learnt about Scouts and Guides First Aid Box equipments, different bandages using their scarf like Triangular Roller, Tailed bandages used for head injury, arm sling, palm bandage and wrist bandage. They also learnt what needs to be done when they have nose bleeding, electric shock, cuts, wounds and burns.  Students were given a demo in making the ‘handmade stretcher’ for providing the first aid on the spot using two sticks and bed sheet.

In order to work together, pool their resources, and share leadership qualities the next activity was a Trust Building Game. This game was organized in the school kindergarten park with several obstacles which they had to cross, trusting the students who were assisting them as they were blindfolded. Post lunch, students in groups started making their tents and gadgets using their creativity and the different knots that they had learnt.

Finally, it was time for the Scouts and Guides to relax and refresh. The camp ended with Camp fire. It was time for the students to bring out their latent talents. The presence of their parents was encouraging.

The activities organised really helped the students to learn and transform their attitude from ‘What can I get’ to ‘What can I give’.  The winners of competitions held during the camp were given prizes and the campers were awarded with certificates for their active participation by the principal Sr Melissa.

Sakshi V. Poojari of Class VA was also awarded a trophy for her participation in Geeta Gayana virtual competition held by Bharat Scouts and Guides, Karnataka.

It was a memorable experience for the Scouts and Guides. The camp ended with students relishing the ice cream. The campers were led by their Guide Captains Ms Aparna and Ms Ashwitha and Scout Masters Mr Praveen, Mr Melwyn, Ms Jyotsna and Ms Dhanyashree. 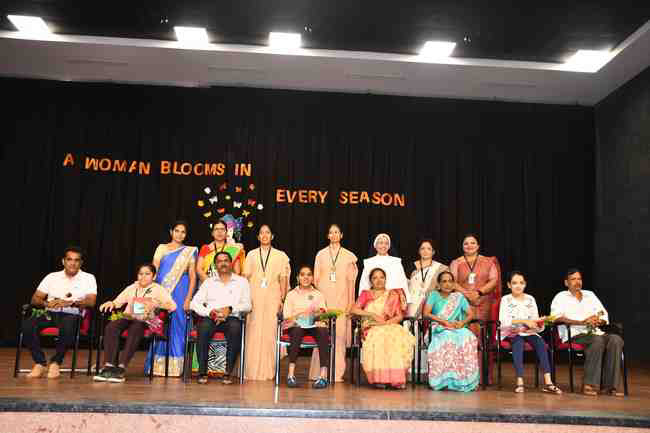