Doha: Mangalore Cricket Club (MCC) celebrated Monti Fest 2021 virtually over Zoom Via MCC Qatar YouTube channel live on Friday, September 17th, 2021. MCC has been celebrating the feast of Nativity every year with the sharing of new corns and blessing of the fruits of people’s labor through the annual ‘Novem Jevann’. The gloom of the pandemic did not hinder MCC to celebrate annual tradition Monthi fest but using the technology in its favour celebrated Monthi Fest virtually for the second time with its Konkani speaking Mangalorean Community in Qatar and over the world.

Monti Fest celebration began at 5 pm with an enthusiastic welcome by two main anchors- Clement Fernandes, a well-known singer and winner of ‘Gulf Voice of Mangalore Season VI’ and ‘Muzo Thalo Gaitholo’ and Alwyn D’Souza, MCC Advisor and Past President and Cultural Secretary of MCC.  The celebration started with a festive message by Fr. Clifford Fernandes, Parish Priest of Kulshekar.  In his message he spoke on Birth of Mother Mary which is the plan of God and her life itself is a lesson for all of us to learn. Two things of her life we should know is to surrender our life to Gods will and her courage. He concluded his message giving us four lessons 1- Values of family relationships, 2- Respect our mother earth which gives us fruits, 3- Respect every form of a girl, 4- See the goodness of everyone.

The cultural program then began with a welcome dance presented by Alvina, Glen, Shanol and little children Sasha, Angelina, Ethan and Raizel on a song composed by Fr. Alwyn Sequeira Carmelite and music by Joel Pereira and choreographed by Sean Fernandes, MCC Joint Secretary.

The highlight of the evening were the special guests with the grand entry of Aab as Abel and Vodlimai as Carmin, played by Amith Mathias, Cultural Secretary of MCC and George Menezes who played as visitors to Qatar and attended Monthi Fest.  They along with MCs Clement and Alwyn kept entertaining us and added colour to the whole evening with their witty jokes and talks between the program. The script was written by Amith Mathias with many good punches and highlighting rich Konkani culture too.

Fr. Anand Castelino, Spiritual Director of Konkani Community in Qatar, then spoke a few words on the occasion and wished all members a Happy Monthi fest. He recited prayers and invoked God’s blessings on the corn. He praised the club for bringing the community together to celebrate the feast as one family inspite of the challenges this year.

MC Clement then invited MCC President Naveen D’Souza to address the gathering. He began his address by wishing all the members a happy Monthi fest. He also acknowledged the presence and welcomed the Presidents of the various Karnataka-based organizations. He thanked the MCC Founder and the advisors for beginning the Monti festh 29 years back and cherished every year’s celebration keeping the tradition alive away from home. This time unlike every year was unique in bringing around more than 70 artists on the stage through mash up Baila dances and executive committee dances. He encouraged the community to support and participate in future events. He acknowledged the efforts put in Executive Committee and members in organizing a virtual celebration of Monti fest successfully for the second time.

President then announced of upcoming MCC Konkani Global Comedy challenge which will be conducted virtually and more details would be released soon.

Academic achievers of Class 12th & 10th and in curricular activities were honoured for their excellent performance.  Advisors presented the students with trophies and certificates.

Vanessa Fernandes winner of Bronze Medalist at the International French Olympiad among all Grade 6 Students was also honoured.

The annual newsletter ‘Sugandh’ Issue No. 23 was presented by editor Savious Crasta and was released by the advisors.  Sugandh newsletter was decorated by colourful articles, poems and   artwork by our talented members and covered all MCC events galore.

The newly joined MCC members were then introduced by Joint Secretary Sean Fernandes.

Few spot games were also played in between the program to entertain the audience. Some of them were subscribing the MCC Qatar YouTube Channel and sending a screenshot, creative family selfie and Quiz of 4 questions based on recently held Online Konkani Course by conducted jointly by MCC in coordination with Mandd Sobhann. Winners for YouTube subscription were Tharanath, Selfie spot game was won by Anish D’Souza and quiz on Konkani learning was won by Freeda Monteiro.

The audience were then entertained by a song ‘Hau Tuka Tu Maka’ proficiently presented by the singing couple Naveen and Sonia Pinto.

Renzil D’Souza, member of Cultural Sub-committee, proposed the vote of thanks and extended his gratitude on behalf of MCC to all those who participated and contributed  for the success of this program.

The President, Executive Committee and Advisory committee members of Mangalore Cricket Club takes this opportunity to express their gratitude to each and every member for their virtual participation with over 3700 viewers on YouTube Live.

MCC takes this opportunity to thank the technical team for conducting the program professionally without any technical glitches. MCC is grateful to the efforts of each and every member for making this virtual coordinated event a success. We invoke Mother Mary’s blessings on each member and their family. May Mother Mary bless us all.  The program can be viewed on 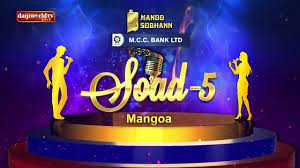