Immediate past President Mr.Jhonas D’Souza welcomed KONCAB President Mr. Arun Fernandes, Vice President Mr. Sylvester D’Souza, General Secretary Mrs.Nora Menezes and Treasurer Mr. Neri D’Silva to the stage to kickstart the AGM proceedings. The AGM began by invoking the blessing of the Almighty God with a short prayer lead by Mrs. Sylvia Rodrigues followed by a prayer to St.Anthony, the patron saint of our Association.

President Mr. Arun Fernandes welcomed the members who had gathered for the 29th Annual General Body Meeting. In his opening address, he mentioned that due to Covid-19 situation in the world and Bangalore in particular, the Association was not able to conduct many of its planned events and programmes, however he expressed satisfaction over the Vaccination Drive jointly organized by KCA and KONCAB and the charity events that were organized by KONCAB in the past year to help poor and needy during the time of Covid-19.

Secretary Mrs. Nora Menezes presented the report of previous AGM and sought approval from the general body. She also read out the activities report of the financial year 2020-21 and thanked the sponsors, benefactors, KONCAB members, the Executive Committee and President and the office bearers for the whole-hearted support during the term.

Treasurer Mr.Neri D’Silva presented the audited Accounts for the financial year 2020-21 sought approval from the general body. Supporting the Treasurer, the Chairman of Konkan Welfare Trust Mr.Sylvester D’Souza explained the functioning of the Trust, the improvements made in the functioning of the Trust and the KWT building, the challenges due to Covid-19 and the financial short supply to complete the pending works like installation of Generator, Air-conditioning, Sound system and starting of the hostel block. He also urged the members to utilize the Halls for their family functions which are available for use at hugely discounted prices for the members of Konkani Community and also for the general public. He asked the KONCAB members to publicize the Konkan Samudai Bhavan facility with their family and friends.

Next agenda item in the AGM was to nominate the auditor for the financial year 2021-22. The AGM unanimously approved the continuance of our auditor of many years, Mr.Mark D’Souza to be the auditor. The president thanked Mr.Mark D’Souza for his service and the guidance provided to the Association for many years, that too at a nominal fee.

Then it was time for felicitation of achievers. The President accompanied by General Secretary, Treasurer and Vice President honored our own multitalented, ever young international famed Athlete, Football Coach, Choir Master, Prestigious Kempe Gowda award winner and several state level awards winner Mr.Tony Lucas to the thunderous applause of the audience as Mrs.Navya Monteiro read out the numerous achievements of Mr.Tony Lucas.

This was followed by the Meritorious Scholarship award distribution to the deserving wards of the members. This year 5 children who have scored outstanding marks in academics (10th std, 12th Std and College education) were nominated and honored with a memento, a certificate, and a cash award. Their names are Nashlley Antony Cornelio, Renisha Ruth Pereira, Christopher Eric Jude Saldanha, Alyn Benny Mendonsa and Ronan Lobo.

As there was a single nomination for each post, the Returning Officer announced the names of the unanimously elected new President, Office bearers and the Executive Committee and introduced them to the general body. An approval was sought with the general body to extend the term of Mr.Vinu Suares as Sport Secretary as he has been nominated beyond the normal 2 terms, which was unanimously approved by the general body.

The newly elected Executive Committee of KONCAB is as follows:

Addressing the members, the newly elected President Mr. Vincent D’Souza thanked and congratulated the outgoing president Mr.Arun Fernandes for the excellent work done by his team in the previous term in spite of Covid-19 challenges. He thanked the general body for giving him the opportunity to lead this prestigious Association and promised to carry on the legacy of KONCAB in the next term and spelt out his plans to improve and take KONCAB to next level.

The official proceedings of the AGM concluded with the vote of thanks proposed by Secretary Mrs.Nora Menezes. After the thanksgiving hymn and the grace before the meal, the members and the Executive Committee proceeded for the fellowship and lunch. 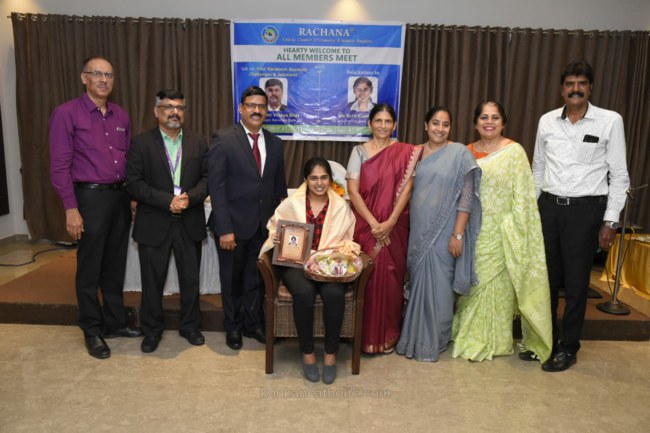