Tuhin Ratnakar final year B.Com. student at St. Aloysius College, was amazed to watch the virtual conference from Mangalore. Tuhin said; “Today I attended a virtual Law Enforcement and Human Trafficking Conference by Mr. Harold D’Souza and he discussed how modern-day slavery occurs in America while sharing his own life story. It was hard for his family to overcome the problem and several challenges were faced in order to re-instate the happy family life. The hurdles faced by his family, motivated him to take a stand for all other victims of human trafficking. Currently, he strives to be the voice of courage and hope for the trafficked victims. This story is only a communicable version of emotions and feelings of oneself and no individual has the power to convey these emotions besides the victimized individual. I am really inspired by the courage and hope he showed while facing this big issue. I also would love to look forward to helping these victims and be a part”

Rakesh Shah from Vadodara attended the conference spoke; “I know Harold D’Souza since 1992. His father Mr. Henry D’Souza and I were good friends. I attended Harold D’Souza’s wedding ceremony and reception. He is a hard-working gentle human full of energy and self-confidence. It was a wonderful webinar today. This conversation will let people know about his struggle and hard time in the USA. His journey from illegal to legal and from survivor to The White House, to Eyes Open International is truly heart touching and inspiring. With his cool mind and broad heart, he always thinks about victims of trafficking. In all his lectures, I could read his pain for victims. My all good wishes are with him and with entire EOI team. May God give him more courage and power to help others”.

A student from The University of Lahore, Pakistan Bilal Ahmad is in final year of Bachelors of Business Administration said; “Harold was a victim of human trafficking and now his struggle is to save people from trafficking. I have learnt so many things and ideas to cease human trafficking. Harold story deeply touched my heart. I really appreciate Harold’s words that is always choose the right way.  He always encourages to do right and have patience. Never go to any country illegally. I really appreciate his efforts and struggle”.

End Slavery Cincinnati will train, educate, and reach out to the community to create 100% awareness in the greater Cincinnati area as to the reality and presence of human trafficking.

“Human trafficking is one of the social problems that has been prevailing since a long time, yet it’s graveness is not recognized as much as it should be. It is the outcome of hardship of people like Harold who are selflessly and diligently working towards bringing out this change in the world. Harold and his family, themselves being victims of human trafficking once, are very much aware of the struggles and traumas victims go through and hence, Harold is now actively working towards spreading more and more awareness about it. Initially with an aim to seek justice for his family and himself, now helping others by bravely stepping forward to stop perpetrators from doing wrongs, it has become his passion and aim of life. It is people like Harold, who have earned the positions they are on today by actively and progressively involving themselves in fighting human trafficking and keep on judiciously using the strengths and power to help people of the society to seek justice and freedom. Even in the time of pandemic, Harold is relentlessly engaged in social work as well as conducting conferences and meetings all around the world and making people aware of struggling people and bringing about solutions to their problems” spoke Sonal Soni, her son studies in U.S.A. Well expressed by Tuhin Ratnakar; “Even though I’m not a victim, Mr.D’Souza’s story has brought an impression in my mind which has made a big change in myself. His voice of courage and wisdom to overcome this is what has inspired me. I am also willing to stand with him as a helping hand for the rest of the people who are facing this and inspire them with the life story that Mr. Harold has shared here.” 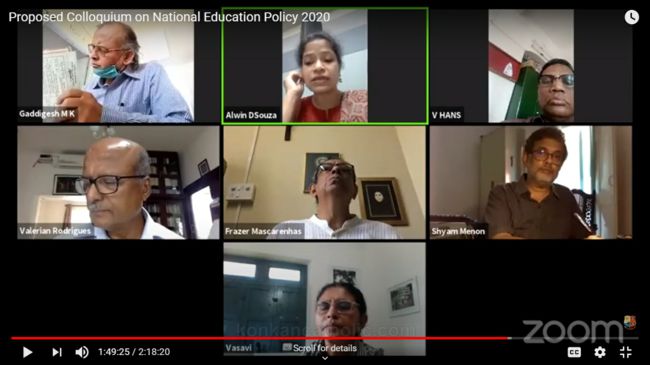