December 19, 2020 was a milestone at The Institute of Konkani, St. Aloysius College (Autonomous), Mangaluru, which will go down in Konkani history.

Welcoming the gathering, in his inaugural address, the President of the programme  Dr(Fr.) Melwyn Pinto, SJ Rector of St. Aloysius College said that even after  the demise of Shri A T Lobo, the great konkani writer we could still feel his presence in our midst;  he said that the period during which such a prolific  writer as Shri AT Lobo wrote, can be considered  the golden age of Konkani writing in spite of all the trials and difficulties faced during those transforming days. Socially and culturally seen as a very vibrant and productive period for our regional Konkani literature.

Gurudatt Baliga, Director,  Vishwa Konkani Kendra, Shakthinagar,  gave an enlightening talk on digitalization of old books, he stressed  that St Aloysius College is the one great factor,  as a home for konkani and it’s 42 groups of diverse user speakers of Konkani from different communties. “This great institution has worked tirelessly for the development of Konkani as a language and culture for more than a 100 years . Therefore it’s a matter  of great satisfaction and joy that such an institution should take up the work of digitalization of the works of Shri A T Lobo.  This type of digitalization of the regional works of Shri A T Lobo will now be accessible to people internationally.”

Further, he reiterated  that the process of digitization was a multifold one,  including scanning and converting the text into OCR, this then can be translated , transliterated, into  any number of languages. Besides, the font format can also be changed. In future this venture can be used with the help of artificial intelligence to generate 6 th volume from the existing 5 volumes of ATL’s  famous novel “ Vell Gheddi”. We wish to assure you at St. Aloysius College that Vishwa Konkani Kendra is  ever willing to extend a keen and heartfelt support to all the literary endeavours of the konkani institute.
Rector, Fr.Melwin Pinto SJ, concurred with Shri Gurudatt Baliga and Shri K Jagadish Pai and said that this digitalization of Shri A T Lobo’s works  would help bring out his books from dusty shelves and cupboards into a virtual world available to all. One major reason why people do not elicit interest in books is that their fragile condition after being kept in library shelves for years.   Digitalization will encourage readers to access works of literature from their own locales. Therefore we need to work hard to facilitate the transition of books in their physical state to a virtual one.

Rev Fr. Praveen Martis SJ, Principal noted that the Konkani institute,  which is 41 years old now, was begun to commemorate 100 years of services of St. Aloysius Institutions. He said that the Konkani Institute has been working hard over these years for the social cultural and linguistic development of Konkani in this region.  In this direction the institute has for the past 40 years been publishing or bringing out Bi-annual editions of a research oriented journal called “Amar Konkani” the Institute has always accorded great importance to research, apart from the recent efforts to digitise old books in the light of the work going on to get recognition of St. Aloysius Institution as deemed  university, the contribution of the Konkani Institute towards the growth of the language and research is now parallel to the work done in various departments of this historical college of Mangaluru.

Mrs Alice Lobo, president of A.T. Lobo foundation was present on the dias.

At the beginning of the programme Dr (Fr) Melwyn Pinto welcomed the gathering. In his welcome speech he said that despite of the demise of Shri A T Lobo a great konkani writer we could still feel his presence in our midst in his literature. The period during which such great writer as late AT Lobo wrote can be considered as the golden age of Konkani writing inspite of all the trials and difficluties faced during those changing days.

Late Apollo Thomas Lobo, popularly known by his pen name “A T Lobo”  is one among the so-called ‘PanchaPandavas’  of  Konkani literature. This year 2020, is the centenary year of his birth.

Brief look at Institute of Konkani:

One of the prestigious institutions of SAC, the ‘Konkani Institute’ , stands out for its unique history and the track record it has registered in the development of Konkani language and literature, an Indo-Aryan language spoken by over 5 million people in World over and written in five different scripts namely, Roman,  Devanagari, Kannada, Perso-Arabic and Malayalam.  Having and nurturing the Konkani Institute is a feather in the cap  for this great College (now autonomous), the seeds of this were sown by Fr.AnjeloSavarioMaffei SJ way back in 1878 when the first batch of Jesuits landed in Mangalore and started the St. Aloysius College in  1880.

Rev Fr.MaffeiSJ, was no linguist in this local dialect, being Italian even English language was alien to him.  Perhaps, he did not consider learning to read and write English as a greater challenge,  but he took up the study of the language of the locals here, very seriously,  that language was Konkani! Within a short span of time Fr. Maffei not only learnt to speak Konkani but in 1882 he prepared a Konkani grammar handbook and got it printed too. Further he prepared a lexicon Konkani – English, English – Konkani. So valuable was this work that the erstwhile Government  Madras Presidency got it printed at its own cost and in the year 1892, the revised edition of Konkani grammar was printed and published by the Codialbail Press in Mangalore.  Eventually, Fr. Maffei became the Rector and Principal of St. Aloysius College and ensured the love of Konkani was ever burning bright – this paved the way for this Konkani Institute at SAC.

In the Centenary Year of the College, 1980, a unique gift was given to the Konkanis of Mangalore – The Konkani Institute of St. Aloysius College, thus giving a new lease of life to Konkani. Rev Fr. Herbert Noronha SJ was the first Director of the Institute. As the first step towards the propagation, development and preservation of the language an exclusive Konkani library was established which has now grown to a strength of nine thousand books plus one thousand boundvolumes of various Konkani periodicals.  The proud possession of the Library is a handwritten copy of ‘Krista Purana’  of Fr. Thomas Stevens  written in the year 1614.  “Amar Konkani” a bi-annual Konkani research journal was started in the year 1981 under the  editorship of (late) VJP Saldanha (Khadaap). The journal has published 57 issues to date in two prominent scripts of Konkani,  Kannada and Devanagari. Presently Konkani litterateur Edwin JF DSouza, who is also the Executive Director of the Konkani Institute, is the editor.  Rev.Fr.Joseph Rodrigues, SJ is the Patron of the Institute with Rev. Fr. SwebertD’Silva, SJ as the Director.

Post Graduate Diploma Studies in Konkani:  What started off as a one-year, four-module diploma course in study of Konkani language, literature and culture culminated within a span of three years, into a full fledged, nine subject two-year Post Graduate Diploma Course which is thrown open to all Konkani enthusiasts, who  have completed their Pre-University studies, in India and overseas by nature of it being a ‘distant education’ (postal-correspondence) course. This was in the year 1997. Till now over 800 students have obtained the Diploma, the first convocation being held on 2 September 2000.  The Konkani Institute is now in the renovated Office in the “Red Building” on the SAC High School Grounds and could be contacted on: Mobile: 9481527394

At this point please be aware we are ever proud to briefly record St. Aloysius College Institute of Konkani and Konkani Department along with the Department of MA Konkani, University Evening College held a webinar series on ‘Konkani Media’ on the 1st, 8th and 15th of August 2020 at St. Aloysius College, Mangalore.  Soon after the serious lockdown ended, no time was wasted and  on 1st August, the first webinar was on Konkani Print Media and the topic was ‘Present scenario of print media and its influence on the quantity of Konkani literature produced’. Dr (Fr) Melwyn Pinto SJ, Director, Institute of Konkani, Radio Saarang and AIMIT, Mangaluru, and  Wilson Kateel, Kannada, Konkani poet, Editor ‘Arso’ Konkani Monthly as the resource persons. Dr (Fr) Praveen Martis SJ, Principal of St Aloysius College (Autonomous), Mangaluru gave the inaugural address. Mrs. Flora Costelino, Lecturer, Konkani Department, SAC was the host. The vote of thanks was  proposed by Elson D’Souza of II B.Com.

The second webinar on Konkani Digital Media was held on 8th August 2020. The topic again was – ‘Present scenario of print media and its influence on the quality of Konkani literature produced’.   H.M. Pernal, Poet, Editor, kittall.com and .Melwyn Rodrigues, SahityaAkademi award winner poet, Editor – kavitaa.com presented papers on the growing digital media as an alternative to Konkani print media and its impact on the quality of Konkani literature produced.  BastiVamanaShenoy, Founder of Vishwa Konkani Kendra gave the inaugural message.

The 3rd and last webinar of the Konkani Media webinar series was held on August 15, 2020. The topic was ‘Sensationalizing mainstream visual media v/s the responsive Konkani visual media reaching the aspirations of the masses during the Kovid-19′. Dr. DevadasPai, Coordinator, Department of MA Konkani, University Evening College delivered the inaugural message. Rev. Fr. Richard D’Souza, Director, Canara Communication Centre, Mangaluru, and Stany Bela, Sub-editor www.daijiworld.com. presented essaysand were the resource Persons. Both second and third webinars were hosted by Dr (Fr) Melwyn Pinto
SJ, Director,Institute of Konkani. The vote of thanks was proposed by Joslin Marina D’Souza of II B.Com. The entire programme was overseen by the program coordinator Joachim Pinto, SAC Institute of Konkani.  Fifty six  students from various colleges and Universities and  several enthusiastic Konkani writers
participatedin the webinar.  You can view the videos by clicking the link below.  https://www.youtube.com/watch?v=z29ZDHtSdC8&feature=youtu.be   The hope of all Konkani lovers that this premier language and culture will revive and grow is reiterated by focused consistent action of the SAC Konkani Institute, Mangaluru. 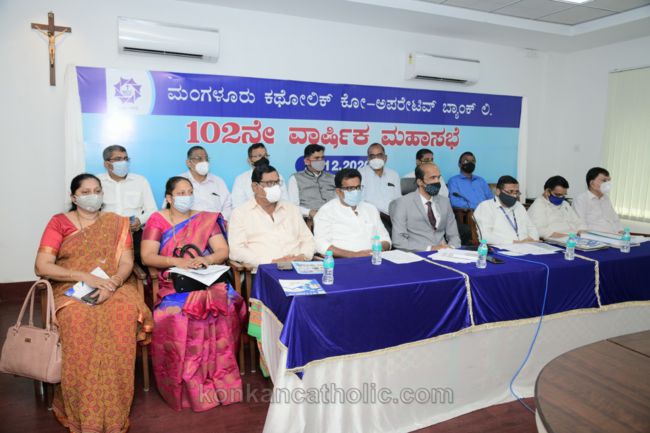 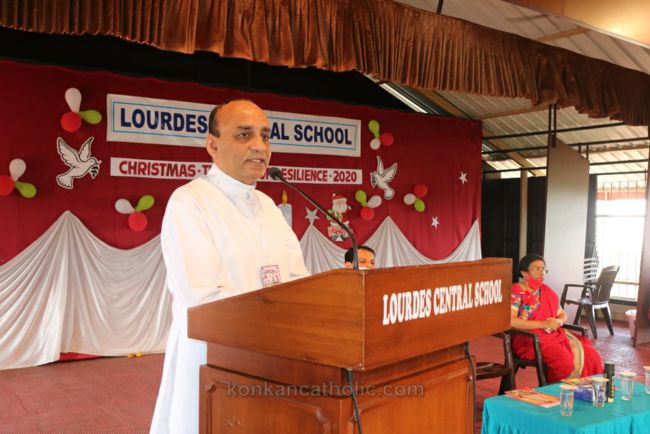